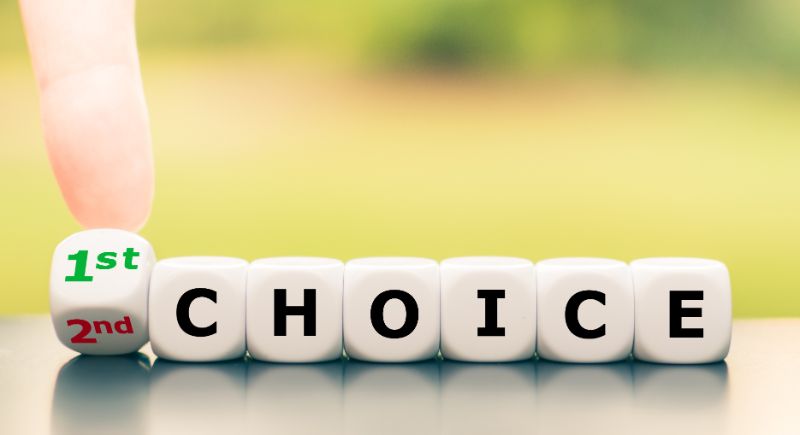 “After they had come to Mysia, they tried to go into Bithynia, but the Spirit did not permit them. So passing by Mysia, they came down to Troas.” (Acts 16:7-8, NKJV)

What to do with second choices? When the apostle Paul travelled through Phrygia and Galatia, he was forbidden by the Holy Spirit to preach the word in Asia (Acts 16:6). He tried to go to Bithynia but the Spirit did not permit him and he ended up in Troas. Bithynia was a rich and fertile province and later became known as the European pilgrims road for people travelling to Jerusalem. Paul’s plan or first choice was to enter Bithynia, preach and built a church but it was not meant to be. God had other plans.

God was not just thinking about the Jews in Asia but also about the Greeks and Romans in Europe. God’s plan was to take the gospel message from the East to the West. In fact God was thinking about all the gentiles including us when He redirected Paul’s course. Christianity spread from Europe to the rest of the world mainly as a result of Paul’s obedience to God’s task. God knew that Paul would meet Lydia at Philippi and that it would result in the gospel spreading to Thyatira and Asia. Paul was a Roman citizen, grew up with the Greek culture and studied under Gamaliel (Acts 22:3). He could spoke Greek, Hebrew and Aramaic and could, so to speak, travel without a ‘visa’. He obeyed God’s sovereign will and followed his redirected course. He arrived in Troas – his second choice place and waited on the Lord for further instructions.

He was not bitter and discouraged. He shielded his heart from filling with self-pity. He patiently waited for guidance and he was ready for his assignment when the Macedonian call came for help. He obeyed and his second choice place became a first choice place as he followed God’s plan. Are you ‘stuck’ in Troas, not knowing what to do or where to go? Do not be discouraged and trust that God knows why He has brought you to that place. Patiently wait upon God (Isaiah 40:31) and pay attention to your Macedonian call.